MongoDB compass reports lost SSH connection after I wake up my Windows laptop from sleep. No options to reconnect are offered. 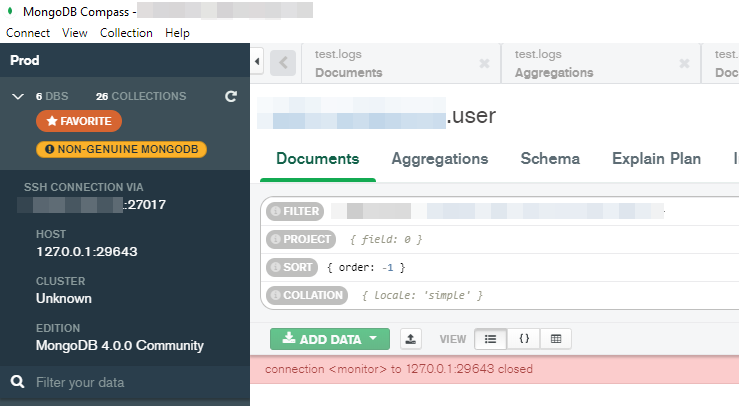 Switch your PC to Sleep mode

Wait a little for the connection to "die" (I did not experiment a lot to determine the amount of time, but you have to give it some time)

Wake it up and try to use the MongoDB Compass instance (i.e. make it fetch some data throught the dead connection)

I'd expect the built-in SSH tunnel to be reinstated automatically, or at the very least to get some button for a manual attempt

A red message box is shown inside the data viewport with some low level message indicating an SSH tunnel failure.

This issue poses a major usability problem for anyone routinely using the sleep mode and trying to continue their work afterwards. Like when you leave a bunch of tabs open with filters, projection and sorting options carefully crafted for some investigative task, and then you have to close them to re-establish the connection. It's a waste of time.

Please ignore the "Non-genuine MongoDB" label in the screenshot. The problem looks the same with genuine installations.